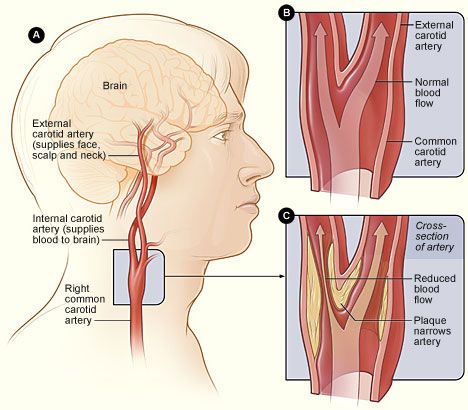 The carotid arteries lie on each side the neck and are one of four arteries that supply the brain with a blood supply. The other two being the left and right vertebral arteries. These arteries commonly join in the head to form a circle. They are essential to supply the brain with oxygen and nutrients in order to maintain proper function.

Carotid artery disease is the build up of plaque (atherosclerosis) within the vessel that causes it to narrow (a stenosis). This process is commonly referred to as "furring up of the arteries".

If the plaque becomes irregular / unstable then clot can develop on it and that clot or some of the plaque can break away and go up to the brain. This causes a blockage in one of the smaller brain arteries and results in a stroke or mini-stroke (TIA).

Weakness, slurring of speech or numbness can occur of the face or arms / legs. The vision can also be affected and is known as Amaurosis Fugax. Typically, the visual disturbance experienced is like a curtain coming down over the eye.

It is common for a second form of imaging, either CT scan or MRI scan to takes place too which confirms the findings but gives more information to your surgeon.

All patients will be started on "best medical therapy" which consists of an anti-platelet drug (aspirin, clopidogrel) and a statin (e.g. simvastatin)

If the ultrasound shows that you have a moderate or severe stenosis in the internal carotid artery surgery will be considered. If you have a mild stenosis then the risks of surgery out weight any benefit from an operation. And if your artery is occluded there is also no benefit from surgery as clots/plaque can no longer pass the occlusion and so can not get to the brain.

The surgical procedure is called a carotid endarterectomy. The procedure can be carried out under both general and local anaesthetic. And a large trial of thousands of patients has shown no difference in outcome between the two techniques. So the choice will be made as a discussion between you and your surgeon.

One the morning of your procedure you will commonly have a repeat ultrasound to make sure the carotid artery has not blocked.

A carotid endarterectomy takes between 1 ½ and 3 hours to perform. The side of the operation usually requires shaving and a vertical incision is usually made to access the artery. The surgeon then needs to clamp the artery to halt the blood flow and the artery is opened. A shunt may be used, especially if under a general anaesthetic. The inner lining is then carefully removed leaving a smooth surface. The artery is usually closed using a patch. The surgeon will ensure there is no bleeding, however a drain is usually left in place for the first 24 hours.

The risks from surgery are related to having an operation and the fact that the artery to the brain needs to be clamped to halt blood flow. There are also a number of nerves in close proximity that can be temporarily or permanently injured. The risks are:

There are factors such as age, smoking, female sex, having had a previous stroke, carotid disease on the other side and other health conditions that might increase the above risks. This will be discussed on an individual basis with you by your surgeon.

Please be aware that the information on this website is not a substitute for taking medical advice. It is always recommended that you have an individual consultation with your surgeon about your particular symptoms and treatment options.Copyright 2015 © Surrey Vascular Surgeon.   Site Built by Clinical Software Solutions Privacy Policy